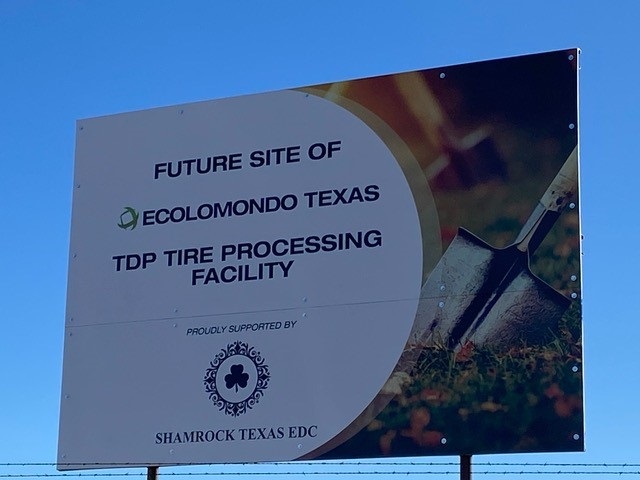 In a webinar on the 19th of April 22, Ecolomondo announced plans to expand its production facilities with a new plant to be constructed in Shamrock, Texas.

The new plant will see the Canadian firm invest C$110M in developing a six-reactor plant capable of handling over 50,000 tons of tyres per annum.

The site is adjacent to I40 (Route66) and in the middle of a highly-populated area giving the company a guaranteed feedstock supply.

CEO Eliot Sorella commented; “We have invested in proprietary technology; nothing we use is off the shelf. Our technology has been tried and tested, and we can produce a very high-quality recovered Carbon Black, the best in the industry. We now have offtake agreements with a global player to take all our rCB from Hawkesbury.

“Virgin Carbon Black production has reached a plateau, but Carbon Black’s demand is still growing. So, the future demand for our rCB is strong and likely to grow.”

Sorella outlined the development plans for Ecolomondo, saying that global expansion was where the company was heading. Several sites were being investigated for proposed developments. Those that met Ecolomondo’s criteria and, where possible joint venture partners could be identified, would likely be the first to be developed.

He also announced that the company was close to signing a JV deal in Shamrock, but either way, the plant would go ahead as they had finance options open for development.