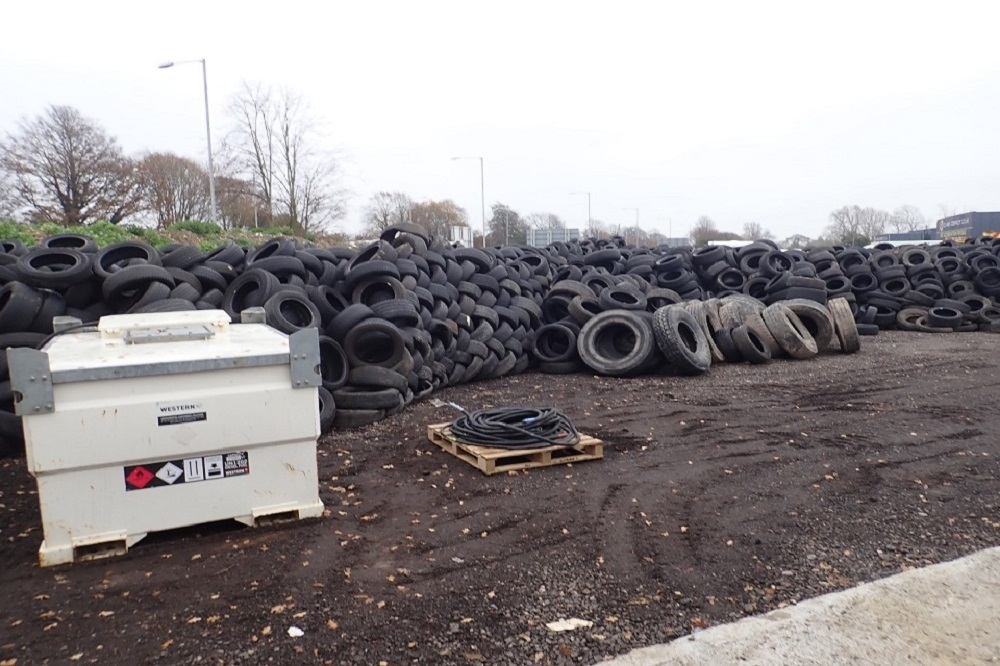 Tyre recycling is not an easy business, although entry at the bottom end of the sector appears simple: Twyford Recycling started at the entry-level and was working up its operation to increase the value of the tyres it recycled.

However, the fluctuation in market prices and the dynamics of the market in India and elsewhere created an ever-growing scenario where the tyres piled up.

However, when the Environment Agency gets involved, there are few acceptable excuses and the operators, Gerard Harkin and Dex Boyle found themselves on the wrong end of the law.

Tyre and Rubber Recycling looked at the EA statement, and there was something that stood out from the press release. That was the leniency of the fines imposed. These were not the fines that a court imposes on waste criminals. They were the minimum allowed by the law. Moreover, the Environment Agency’s costs of around £18,000 were not allowed, and the defendants did not have to pay EA costs.

Harkin told Tyre and Rubber Recycling that there was more to this. More questions than answers about why this case went to trial. What role did other players have in harming Twyford Recycling’s operation? How much influence did a competitor have on the EA’s actions?

Harkin was clear; they admitted being at fault but pleaded extenuating circumstances – a drop in demand due to the pandemic, containers held un by the blockage of the Suez Canal, a shortage of lorry drivers, and export agents promising containers that never arrived – in the meantime the business needed income to stay afloat.

It is easy to understand how the best of intentions can go astray, and circumstances conspire to create situations that get out of control.

The irony of the case is that Harkin and Boyle were operating on a site that they had invested a lot of money in. It had hard standing, it had containment, and they had invested in a shredder, whilst others were simply baling and shipping tyres out of the country, Twyford had invested in £20,000 just on site infrastructure. The aim was to build a proper permitted recycling operation.

Harkin says that despite issues with the Exemption breaches, they had invested almost £20,000 in applying for a permit.. An application that had been rejected. This despite the EA advising that it wanted to guide businesses into legitimate and proper operations.

The Environment Agency had given Harkin and Boyle several warnings about safety in 2020 and 2021, including orders to stop work because the site on Appledram Business Park was deemed a fire-risk.

A “member of the public” was concerned Twyford Recycling was breaking the law in how it stored thousands of tyres collected from other businesses along the south coast. This is another anomaly; usually, the EA only investigates after the fact, not on a single complaint.

“Twyford Recycling, under the direction of those two men, put the needs of the business first.”

Harkin and Boyle both pleaded guilty to allowing Twyford Recycling Ltd to deposit, treat and store tyres outside the company’s environmental permit, against regulations 12 (1), 38 (1)(a) and 41 (1)(a) of the Environmental Permitting (England and Wales) Regulations 2016. The offences took place between 29 November 2020 and 5 February 2021, and from 15 March to 28 July last year.

Twyford Recycling Ltd, of Plot F, Appledram Business Park, in Chichester, admitted three charges, including two of operating between those dates in 2020 and 2021, in breach of regulations 12 and 38 (1)(a) of the Environmental Permitting (England and Wales) Regulations 2016.

The company also pleaded guilty to failing to provide waste transfer notes of tyres brought in and out of the business park on or before 21 May 2021, against section 34 (5) and (6) of the Environmental Protection Act 1990 and regulation 35 (6) of the Waste (England and Wales) Regulations 2011.

Harkin and Boyle were each given 40 hours of unpaid work.

The penalties imposed were minimal compared to large fines and jail sentences issued elsewhere, and costs were not awarded, which stands to question the decision to prosecute.

Asked what the future held, Harkin told Tyre and Rubber Recycling that appeals against the refusal of a permit were underway and that the yard had been handed over to a third party with a T4 and T8 exemption to carry on the business operation in the interim.

Since publishing the above article, we have received a reader’s letter from the Environment Agency, which we republish here:

I was interested to read your coverage on 7 December of our prosecution of a West Sussex tyre recycling company and its two directors: Twyford Recycling Falls Foul of the Law.

The Environment Agency prosecuted Twyford Recycling Ltd, and directors Gerard Harkin and Dex Boyle for illegal storage and treatment of tyres. All three entered guilty pleas to offences under the Environmental Permitting Regulations, accepting they didn’t comply with the rules and regulations.

District judge Tessa Szagun agreed in court with the Environment Agency’s assessment the site presented a significant risk to the environment and that the offending was deliberate.

If the thousands of tyres they stored on site caught fire, West Sussex Fire and Rescue Service told our investigation it would be classed as a major incident.

The Environment Agency gives advice, guidance and warnings to operators. However, where action isn’t taken to improve operations sufficiently, there must be a consequence to ensure people, wildlife and the environment are safeguarded.

Gerard Harkin and Dex Boyle failed to take the advice and warnings given, which resulted in firm, robust action by the Environment Agency in response to offences committed.

The district judge fined Twyford Recycling £500 and the same in costs, and gave Harkin and Boyle 40 hours each of unpaid work, having considered their claim to limited finances and the impact of the pandemic.

The Environment Agency is publicly-funded, and we would have liked to recoup the £18,000+ in costs of pursuing the case to court, but the prosecution was far from being “wasted.”

Stopping illegal activities is a success for the environment, and the Environment Agency will continue to work to prevent, protect and pursue, tackling illegal waste operations and activities.

Tyre recycling is not an easy business, although entry at the bottom end of the sector appears simple: Twyford Recycling started at the entry-level and was working up its operation to increase the value of the tyres it recycled. However, the fluctuation in market prices and the dynamics of the market in India and elsewhere created an ever-growing scenario where the tyres piled up. However, when the Environment Agency gets involved, there are few acceptable excuses and the operators, Gerard Harkin and Dex Boyle found themselves on the wrong end of the law. Tyre and Rubber Recycling looked at the...