6PPD is Recognised as a Challenge 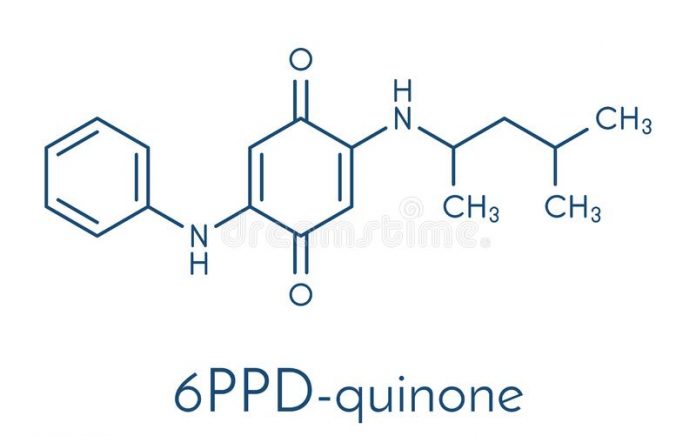 6PPD-Quinone is the next challenge for the tyre sector

6PPD is an antioxidant and antiozonant that helps prevent the degradation and cracking of rubber compounds caused by exposure to oxygen, ozone and temperature fluctuation. 6PPD is used industry-wide to help tyres resist degradation and cracking, which is vital for driver and passenger safety. Antioxidants support increased tyre endurance. There are no known alternatives to 6PPD that provide the same safety and performance characteristics in a tyre.

The challenge arises for the wider tyre industry in that tyre wear dust containing 6PPD, is washed into the waterways and there is some evidence linking 6PPD-Quinone (a derivative developing from 6PPD)with the death of Coho salmon.

At the recent ETRA conference in Brussels, Nick Molden, from Emissions Analytics UK, discussed the issues arising from tyre wear dust and pointed out that the wear particles were so small that they were found to not only contaminate the watercourse, though much actually is absorbed in roadside land, but the finest of particles become airborne and can be inhaled by humans and animal life.

Tyre wear dust is a tyre manufacturer problem to resolve, but for the recycler shredding tyres, there is also a risk to employees, and of course there is the matter of such dust potentially being present in crumb rubber infill (though it should have been classified out as a higher value product).

A 2020 study led by the University of Washington and Washington State University found the toxin was highly deadly, killing some young Coho salmon in as few as four hours after exposure.

The USTMA in Washington, D.C., provided tyre samples and information to the Washington researchers as part of the study. After the findings were released, the association joined various environmental groups and agencies to petition the state to review the chemical.

“We are pleased that there have been many advancements in the body of research on 6PPD-Quinone,” said Sarah Amick, a vice president at the association. “However, many data gaps still remain, so we remain committed to collaborating with researchers, regulators and stakeholders to fill these knowledge gaps and help find a viable alternative to 6PPD that does not compromise tyre performance or driver safety and also ensures environmental safety.”

The USTMA also recently announced that it supports the proposed rulemaking released by the California Department of Toxic Substances Control to designate 6PPD in automobile tyres as a priority product for review under the state’s Safer Consumer Products green chemistry programme.

“USTMA supports the decision by the California DTSC to list 6PPD as a priority product under the state’s green chemistry program,” said USTMA President and CEO Anne Forristall Luke. “USTMA members are committed to producing the safest, most durable and most efficient tires possible. This is why we made the request to the DTSC to list 6PPD as a priority product a few weeks after the release of the Tian et al. study – and why we have been working with the agency and many other stakeholders ever since. We are fully committed to continuing to work with the DTSC team to find a viable alternative.”

Tyre manufacturers have taken seriously the study and more recent scientific findings which indicate that 6PPD-Quinone, a previously unknown transformation product of 6PPD – an essential antioxidant and antiozonant used in tyres – has contributed to the mortality of Coho salmon and potentially poses risks to other aquatic species in the Pacific Northwest.

Since the release of the study 18 months ago, the USTMA says it has worked with researchers, regulators and legislators to more fully understand the implications of these findings and to seek solutions, including: filling research gaps around 6PPD-Quinone; advocating for a 6PPD alternatives analysis in California; and supporting mitigation efforts to treat stormwater runoff.