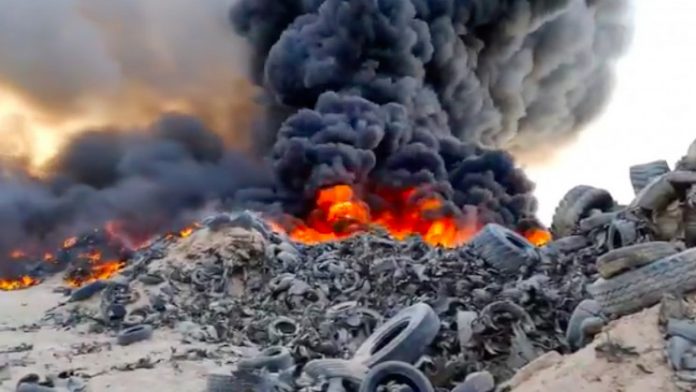 Kuwait’s tyre graveyard was relocated earlier in 2022 through a massive transport operation. The tyres were taken to a new recycling base at Al-Salmi.

The site of the original dump was earmarked for a new housing development and there was a pressing need to deal with the estimated 42 million tyres dumped in the desert.

Competition to win the contract to recycle the tyres was fierce, and one of the winners was EPSCO.
At a plant run by the EPSCO Global General Trading recycling company, employees sort and shred scrap tyres, before pressing the particles into flooring tiles.

“The factory is helping society by cleaning up the dumped old tires and turning them into consumer products,” said EPSCO partner and CEO Alaa Hassan from EPSCO, adding they also export products to neighboring Gulf countries and Asia.

The EPSCO plant, which began operations in January 2021, can recycle up to 3 million tyres a year, the company said. Scrap tyres are a major environmental problem worldwide due to their bulk and the chemicals they can release.

Kuwait, an OPEC member with a population around 4.5 million, had about 2.4 million vehicles in 2019, Central Statistical Bureau data shows, up from 1.5 million in 2010.

The Al Khair Group transported more than half of all the tyres to the new site using up to 500 trucks a day and is planning to open a factory to pyrolyse the tyres, its CEO Hammoud Al-Marri said.