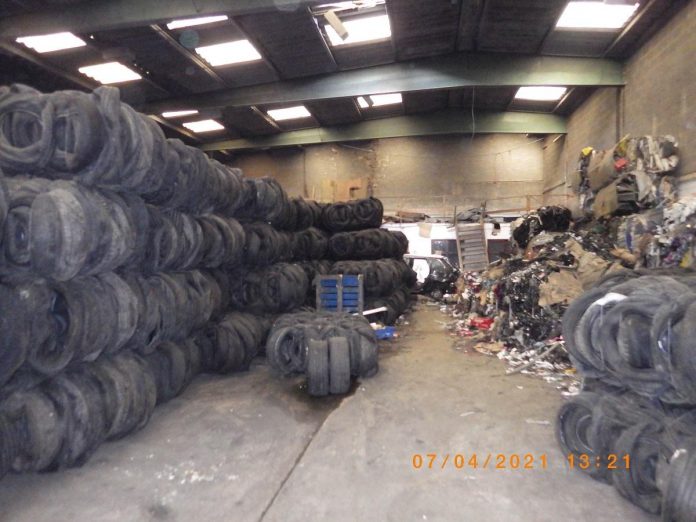 A Bradford business has been found guilty of illegally storing waste tyres in a mill at Bradford.

Waste Tyre Traders Ltd. And its director Iftikhar Ahmed were brought before Bradford and Keighly Magistrates Court, where evidence from the Environment Agency was used to prosecute the case.

The court heard that the Environment Agency discovered potentially dangerous conditions during a crackdown on illegal tyre storage following a devastating blaze in the city centre in late 2020.

Waste Tyre Traders Ltd operated out of a former mill on Eastwood Street, storing and bundling tyres that were intended to be shipped off to be recycled.

Ahmed, 49, pleaded guilty to the charge, and to an identical charge placed on the company he was director of.

Nigel Augustin, representing the Environment Agency, told Magistrates that current legislation means that such businesses are only allowed to store up to 40 tonnes of tyres on site for a maximum of seven days.  If they store more than 40 tonnes, they require an environmental permit.

Mr Augustin said the Environment Agency attended Eastwood Mills in February 2021 “due to concerns that a large number of tyres were present.”

He said: “This visit was part of a campaign of checking on waste tyre businesses following a huge tyre fire in November 2020.”

Officers attending counted around 215 bales of tyres, some standing 12 feet tall. They estimated this would have meant around 172 tonnes of tyres were being stored in the mill.

Mr Augustin said: “This offending is reckless. Advice and guidance were given. It was made quite clear what they needed to do.

“There was a fire risk and a risk to the environment from storing combustible waste in this way over a long period of time. There was a risk of significant damage to the building and neighbouring buildings, and the environment.”

Mr Hussain, defending Ahmed, told Magistrates the whole case boiled down to the impact of Covid 19.

He said Ahmed took on the business early on in the pandemic and had no idea the devastating impact lockdown would have on the tyre recycling business.

He said; “He made a substantial investment, buying expensive equipment including a machine to bale tyres.”

Magistrates were told that the bales were to be placed into containers and shipped out to places where they would be recycled.

Mr Hussain said: “The something extraordinary occurred – we had the worst pandemic we’ve had in over 100 years. It effected the whole world.

“The essence of it was he couldn’t get the tyres shifted. He stopped trading, and tried to get the tyres removed, but no containers were available.”

The court heard Ahmed had a previous conviction for a similar offence dating back to 2014.

Chair of the Bench Mr Khan said: “Unless you had a crystal ball, no one would know how it would pan out. Nevertheless, the Environment Agency have a job to do.”