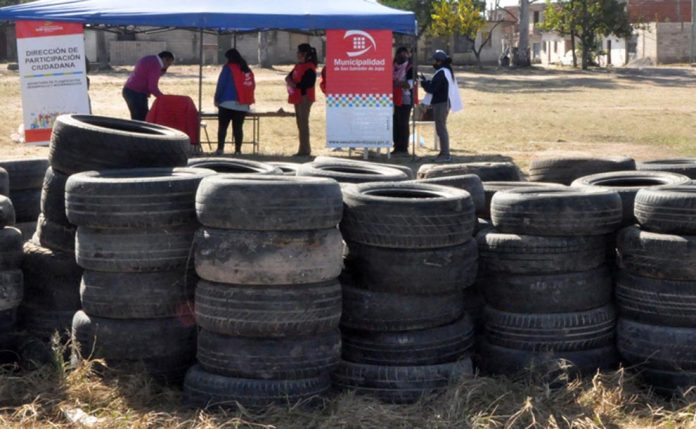 In a programme called “Neumatón”, they collected 600 disused tyres in Jujuy. “It’s not just about recycling casings, but about dengue prevention,” local officials stressed.

Residents of the southern sector of the city, in Argentina’s most north-westerly province bordering Chile and Bolivia, particularly from the Malvinas neighbourhood, staged a new round of the “Neumatón”, an activity carried out by the Municipality of San Salvador de Jujuy through the Ministry of Planning and Environment, with the aim of collecting ELT

The collection stage was the sports centre of the 13 de Julio neighbourhood and during the day they managed to collect 600 disused tyres. In this regard, the director of planning, Alejandro Soruco, indicated that this new edition of the “Neumatón” covered the Malvinas barrio, and highlighted the important collaboration received from the neighbours who once again joined in the municipal project.

Rafael Lohrengel, deputy secretary of Public Services, praised the initiative of the Directorate for Citizen Participation and urged residents to participate “to get rid of the tyres that are often used to support a sheet metal in the houses or to make some delimitation” and He added that “it is not only about recycling tyres, but also about dengue prevention”

For his part, Adrián Jacinto, deputy director of Urban Hygiene, explained that for the collection, three open-box trucks were available, which were complemented by three other auxiliary vehicles that were transferred to the “Pioli” recycling plant based near the Ruta 66.