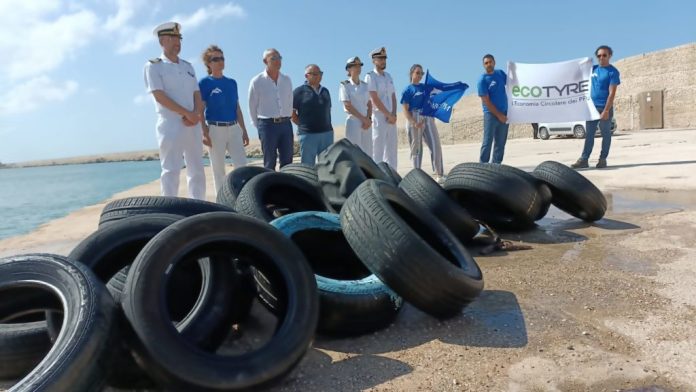 Marevivo and EcoTyre’s journey around Italy in search of ELTs – End of Life Tyres on land and at sea resumes, and this year we start from Mazara del Vallo.

This year sees the ninth edition of this initiative, sponsored by the Ministry of Ecological Transition, in favour of the environment and the protection of the sea thanks to the additional collections organised by EcoTyre and carried out with the valuable contribution of Marevivo volunteers.

ELTs are classified as permanent waste; that is, they do not deteriorate; they remain there, in the environment, for hundreds of years. If well managed, however, they are 100 per cent recyclable and are transformed into a resource. The crumb and powders resulting from their processing can be used in many uses, from shockproof flooring to sound-absorbing panels, passing from urban furniture to modified asphalts.

In order to encourage the recycling of rubber, EcoTyre has developed the ‘From Rubber to Rubber‘ research and development project, which has allowed the reuse of ELT powder for the production of new “green” products. Today it is in phase 4.0, that is, the industrialisation process with the use of elastomers derived from ELTs within the products of the Versalis Revive® DVC range.

In the first stage of this year’s campaign, EcoTyre collected from Mazara del Vallo a total of 300 kg of ELTs thanks to the operations of the Mazara diving schools and the Underwater Group of the Italian Naval League of Mazara del Vallo (Vito Licari, Walter Marino, Massimiliano Piccolo, Daniela Di Gregorio, Giuseppe Lo Iacono, Pietro Ingargiola, Cristina Galfano, and Salvatore Lipari) who cleaned up the New Port-Quay Mokarta of ELTs lying on the seabed.

The ELTs collected were taken to the nearest treatment plant, respecting the proximity logic on which EcoTyre bases its activity, to be correctly treated, appropriately recycled, and reintroduced into the circular economy cycle.

The journey of Marevivo and EcoTyre this year sees seven stages: after Mazara del Vallo, it will be the turn of Gaeta, Isola delle Feminine, Alghero, Viareggio, Laguna di Orbetello and Lampedusa.

“We are starting again with this extraordinary ELT collection initiative that will involve many wonderful places in our Peninsula,” said Enrico Ambrogio, President of EcoTyre. “We aim for Zero ELT on the Italian coasts, in partnership with Marevivo, whom I thank for the logistical support and the contagious enthusiasm of the volunteers; they are part of our larger project ZERO ELT, thanks to which, in recent years, with over 200 initiatives, millions of kilos of ELTs have been permanently eliminated from the environment. But above all, we were able to talk to citizens through awareness and information campaigns on the ELT management chain.

With Marevivo in the last interventions carried out, we have noticed with surprise and satisfaction that tyres being abandoned in the environment are fewer. For our members and for us, this is an outstanding achievement “.

“More and more requests are coming from all over Italy for this initiative because it is important to raise awareness. Citizens often do not know that end-of-life tyres are a type of “permanent” waste that, if left in nature, takes hundreds of years to degrade. If it is managed correctly, it becomes a 100 per cent recyclable resource and can be reused to create new materials, in compliance with the principle on which the circular economy is based,” said Carmen di Penta, General Manager of Marevivo. “The Municipal Administrations welcome our interventions, and we contribute to sensitising people on the importance of protecting the marine ecosystem. We thank the Municipality, the Coast Guard and all the volunteers who participated and are waiting for the next intervention “.

“Last July 2021, Zero ELT was organised in Marsala thanks to the volunteers of the operational headquarters of the territory, in collaboration with the Commander of the Coast Guard Carla Picardi, with the patronage of the Municipality.

Approximately 20,000 tons of tyres were pulled out of the harbour. It was the first significant event for citizens, followed by other awareness-raising and environmental education events,” said Luisa Tumbarello, Head of Marevivo operational headquarters in Marsala. “We are working to grow the work team in Marsala and Mazara and to allow the Marsala operational headquarters to carry out as many future projects aimed at young people and all citizens for the protection of the environment and for a change of mentality and ways of our citizens.”

“Mazara del Vallo has stood out for some years as a virtuous municipality for separate waste collection, and therefore having carried out the first Zero ELT event in our city is a source of pride for us and constitutes a further incentive to do more and better for the environment and for the implementation of the circular economy,” underlined the Mayor of Mazara del Vallo Salvatore Quinci, “We thank Carmen Di Penta, general manager of Marevivo and Enrico Ambrogio president of EcoTyre for having started the campaign that will bring the project around Italy.”